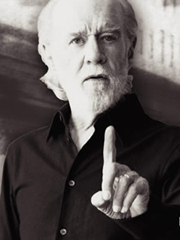 George Carlin is with the worms. Not with God. He knew that was bullshit, and said so.

Unlike Tim Russert, whose eulogies ate up inordinate amounts of bandwidth, newsprint and talking head time this past week, Carlin was a real giant, a true innovator. Perhaps it’s petty to play a game of “dueling dead guys” or “my dead guy is better than your dead guy,” but, unlike Russert, who, when all is said and done never really spoke truth to power, Carlin did. The fact that Fox News hounds eulogized Russert as vociferously and lovingly as anyone else tells me that. Faux News fans cringe at the likes of Carlin, aetheist, critic of religion, and the Bush and Nixon regimes, and general thorn in the side of those with fascistic tendencies.

There will be a lot said about Carlin, I should hope, in the coming days, particularly by other, more articulate and insightful bloggers.

I’ll only note that I always considered it ballsy that PBS hired Carlin to be Mr. Conductor on the pre-school kids’ show, “Thomas the Tank Engine,” considering what a controversial figure he was. That was a great ‘fuck you’ to the Jesse Helms’ and the like of the world who staged political assaults on public TV.

I’ve known Carlin’s work since the ’70s and own all of this records and CDs. He was one of the funniest men who ever lived. Too bad he won’t be around anymore to blast the purveyors of bullshit.

Outer Galaxy Lounge is a new blog I’ve started devoted to MP3s of EZ, retro, Brazilian, jazz, blues, old R&B, soul, miscellaneous oddities, my own mix comps and more. Now that I finally have one of my old turntables back in order again and a decent laptop hooked-in setup I’m ready to convert some of my old 45s from the 70s (and some of my Mom’s and Dad’s from the ’50s) into digital format. Also coming will be some LPs and sets that have never been issued on CD. I’m looking for this to help give me the incentive to undertake a long-overdue project of converting the massive 28-set (40 tracks per set) LP series “Giants of Jazz” issued by Time-Life in the late ’70s and early ’80s. It is one of the best sounding, best compiled retro sets ever released in any format.

It sure will be nice to finally have CDs and MP3s of those. Until now all that great stuff was inaccessible or only partially available in inferior CD compilations from other source materials. More on that as I progress. For now, I get the Lounge off to a modest start with an oddity: a 33 1/3 recording by the faux band “The Sugar Bears” that I cut off the back of a circa 1971 Post Super Sugar Crisp cereal box back in my youth. The record, made of thin cardboard with a coating of some vinyl/plastic material, is in surprisingly good shape and sounds fairly good considering. Check it out at Outer Galaxy Lounge.
-Evan