Dr. Smith Made it Back to Earth; or Never Fear, Smith was Here…in Louisville 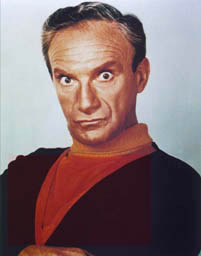 Ten years ago or so a co-worker claimed that he had once seen Dr. Smith in Middletown, a suburban area east of Louisville, Ky. Yes, that Dr. Smith: actor Jonathan Harris of TV’s ’60s sci-fi cheese classic, Lost in Space. Having watched this show religiously in my impressionable youth, this claim was regarded by me with admiration and wonder probably way out of proportion to its importance in the grand scheme of things. “Yeah,” said my co-worker, “He was shopping at Kroger.” Well, that gave it some credibility. There is a Kroger in Middletown. I asked him what the good doctor was buying at the grocery. My colleague did not know.

Smith sightings became something of an unconfirmed local legend—sort of like the Pope Lick Monster—to the point that the city’s main news rag, The Courier-Journal stepped in to settle the mystery. I believe the TV columnist at the time, possibly David Inman, responded to a letter-writer claiming to have seen Harris in Middletown. It was true, Inman wrote. Harris sometimes visited his nephew in Middletown back in the ’80s. The visitations ceased when the nephew moved from the area at some unknown point.

Unfortunately, Smith and the Pope Lick Goatman never encountered one another. Imagine the effeminate yelp the old doc would have howled at that one.

Alas—and “oh, the pain” to us all—the good doctor departed this earthly realm in 2002. But his good buddy the robot is still going strong. He visited Wild and Woolly Video in Louisville a couple of years ago.

Oddly, I never got a glimpse of these spacey visitors to my hometown. Yet, I’ve seen a silver UFO and a guy who looked a helluva lot like Elvis.

(P.S. – No more Gravy Bread postings until mid-next week as I will likely have no computer access till after the holiday. Everyone have a great one!)