Say Ya Wanna Revolution? Check out This Oddball Museum (Unseen Louisville No. 2)

Why, you ask, is Barbie’s boyfriend, Ken, wearing Revolutionary War garb? Well, this, of course, is not Ken. (Because, as you know, he and the Beaver were killed in Vietnam, fighting alongside the Red-bearded G.I. Joe.)

No, what we have here are some anonymous cannoneers from our great war of independence. 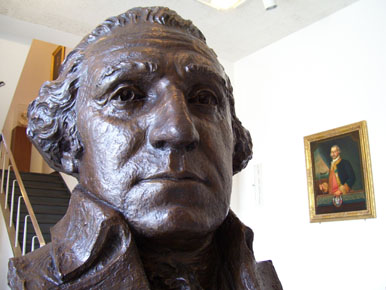 Where we are is 1000 S. Fourth Street (Fourth and Kentucky streets), in Louisville, Ky., USA, and this is PART TWO of our ongoing “Unseen Louisville” series of places around town that you probably don’t know about, but maybe should.

Extrapolating from an unscientific poll of folks I queried, it’s probably safe to say that virtually nobody in Louisville knows about the existence of the National Society of the Sons of the American Revolution, or at least that its headquarters is just a few blocks south of the Louisville Free Public Library main branch. Even worse, that means the locals are missing out on a pretty nice little museum that encompasses the first and part of the basement floors of the facility.

This is the kind of place you’d expect to find in Washington, D.C., and indeed this headquarters was in the nation’s capital until it moved to Louisville in 1978, according to Denise Hall, a representative who spoke to me as I toured the building.

Eyeing the rather undistinguished-looking concrete slab office structure from the outside doesn’t bode well—no wonder so many people pass by this building without a notice or thought.

Yet, what’s inside is a treasure trove of authentic and reproduced Revolutionary War paraphernalia—and lots of vintage colorful paintings of war scenes and heroes.

The main goal of the place is to provide geneological and other resources to its membership, which includes 26,000 male descendents of the war’s veterans.

It is in fact not really considered a museum, just a headquarters. The exhibits are displayed in the main lobby, several side rooms and some stairwells—all of which adjoin various administrative offices. The mix of real-use offices and museum space gives the place a nice vibe actually. Bunches of old geezers with bright vest coats flit about back and forth amid the bric-a-brac of their long-dead ancestors. A nice sense of continuity and living history in that.

The small size of the display area means you can take it all in fairly quickly; it’s even a nice stop for part of your lunch hour, and is worth a drive to see.

Displays include a full-sized replica of George Washington’s office (immediately to the right of the entrance), a “Martha Washington” room that includes an actual letter from George and a remnant from a dress of the First Lady. There’s also a remnant of a flag Washington carried into battle, an actual ring worn by him, and a life mask.

This is one museum I plan to visit again to explore in greater detail.

And it’s free and open to the general public during business hours (despite a misleading sign on the door that says it isn’t.)

While I was touring the lobby, a super-nice lady at the entrance desk named Senoria Williams was putting together for me a packet filled with informational brochures and a mini American flag suitable for desk mounting. I did not ask for this, she just did it.

Nor did she ask for a donation, and none is required. But I brought up the subject and a collection jar was produced, whereupon I volunteered freely a modest dollar.

Seems the organization is in the middle of a fund-raising drive to build a new, larger geneological center on an adjacent lot.

I hope, though, that the historical collection remains in its present building. It fits nicely in there and the lighting is good, using big windows and exterior sunlight well.

Plus, it’s a no-frills, old-school museum setting—and that’s what I like.

The organization really could use a better website, though, especially with a less dismal-looking photo of its building (it obviously was scanned, poorly, right off a brochure). I would suggest to them that a picture from their display area (like the one I took at the top of this posting) would look better. 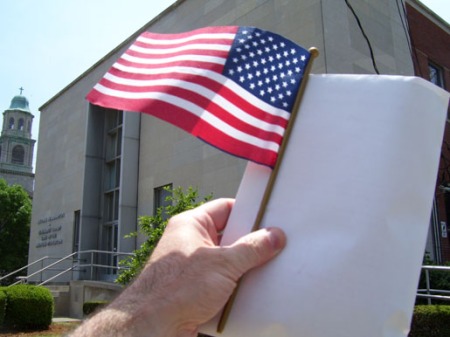 It was kind of cool that when I took this last shot against the backdrop of the headquarter’s side entrance, the wind caught the little flag on my brochure packet and it unfurled just as I snapped. Karl Rove couldn’t have orchestrated it better.

-EG (all photos in this posting copyright 2007 Evan G)

FYI: below are a few other images from my visit: 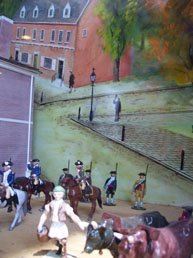