Good Ole Fun With the Relatives in Fern Creek; or, Am I Really Related to These People? 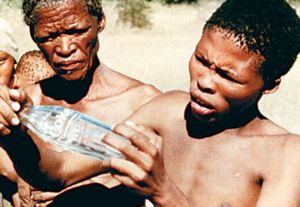 This whole thing is going to sound insufferably snooty, as any story that leads off using the word “insufferably” inevitably must.

The thing is, I was pretty much dragged by my mother to a family reunion this past Sunday, gathering together those on her side of the family, of which she is now the patriarch, the oldest living survivor. There would be no avoiding this. Whatever else may have been on my calendar for that Sunday was worse than secondary – it was stricken from the record.

So I met with distant aunts and uncles and cousins several steps removed from my ability to remember, faces that in some cases I recognized but could not put names to, many of them layered with a new coating of shopworn leather wrinkles.

I mostly sat and watched heavyset adults and kids splash around in a nice big pool, while family cliques grouped off in comfortable familiarity to eat and yak. And NASCAR was revved up on the big screen TV in the basement, to one side of the NASCAR paraphernalia on wooden and glass shelves. If there was a book of any consequence to be found in this house, I never spotted it.

These were my kin, my blood, residing in a part of town that, however clean and groomed most of Fern Creek is, gets the bad rap in Louisville as the stomping ground of barbarian rednecks. That, of course, is not fair, but my overeducated, superior-feeling ass could only see in the lives of my relatives too much evidence to support the stereotype.

They were all courteous and harmless; conversations remained safe and dull. I was no help, but neither did I hinder things. I sat and ate the grub offered, happy that there was plenty enough to offset the lack of a vegan main course. Lots of bratwurst, hot dogs and cheeseburgers went uneaten. In my carnivorous days, I could have polished off at least a couple of those.

The highlight of the day, for me anyway, was when one of my distant aunts and uncles picked up one of the empty bottles of Shiner Bock I had consumed and placed on a table near them. The party was BYOB, and this slightly upscale hefeweizen was what I had chosen to bring along. The way everyone looked at it made me feel like Cinderella in rags at the ball. This was the land where watery, aluminum-tinged Bud Light ruled. “That ain’t one of those beers that’ll put hair on your chest, is it?” asked one uncle. “Well,” says I, “since I already have hair on my chest I don’t have to worry about it.” Another distant uncle picked it up and stared at it, quizzically, eyebrows furrowed in a sort of uncomprehending, baffled, slightly distressed attitude. He passed it to a distant aunt who did the same, holding it up and looking at it, like the early man in 2001: A Space Odyssey trying to figure out new uses for a bone.

I immediately was reminded of that scene in The Gods Must Be Crazy where the Kalahari man picks up the Coke bottle thrown from an airplance and wonders what the hell it is. I mentioned this to my sister, and she laughed.

Is it fair to say I’ve outgrown these people, or merely grown differently? But no, one would have to grow, period. I couldn’t see any evidence of it in their cases, and saying so here makes me sound like an arrogant upstart who’s gotten above his raisin’.

And that makes me feel guilty, but it also makes me confused. I want to be sociable, genial, open to the experiences and lives of others. But I can’t help but be judgmental, elitist. That’s just the way it is.

So, maybe my relatives are bigger than me because I doubt they harbored such corrosive, cynical, jaded, unhealthy thoughts.

And that might mean that maybe I can learn something from them. Maybe we look at each other like we would strange Coke bottles fallen from the sky.

This entry was posted on Thursday, August 7th, 2008 at 7:00 am and is filed under beer, family, family reunion, Fern Creek, Gravy Bread Postings, humor, Kentucky, Ky., Life, lifestyle, Louisville, NASCAR, Shiner Bock, The Gods Must be Crazy. You can follow any responses to this entry through the RSS 2.0 feed. You can leave a response, or trackback from your own site.