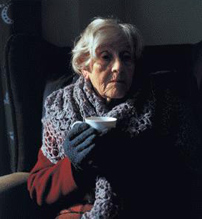 Here we are in the summer of 2008 and already at mid-year, the local and national news has been fed the directives from its corporate masters and informed us that winter 2008-2009 will be appallingly expensive if you, as a human being who needs to avoid freezing to stay alive, want to heat your home. So, I want to know, who told them this? Where has this information come from? Which executives sat down and decided that home heating will be expensive this winter? Give me some names! Who are they? How do they know so far in advance what is going to happen? The media never tells us. We’re just told that the word comes somewhere from on high, so get used to it and tough shit if you don’t like it. History tells us in times of heavy speculation, prices soar. Guess what’s a popular commodity for speculation right now? That’s right, oil and gas. The fix is in folks. Let’s see if the corporate-owned politicians in either of the corporate-owned political parties will do anything about it when it hits. And, since we already know so much in advance, why is nothing being done these many months in advance to stop, avert, or ease the situation, or ensure fairly priced energy to average citizens? We have several months to take actions, but instead we’re just told we have several months to brace ourselves. Last winter, people had to borrow money to heat their homes, or got so far behind in their payments that they’re still playing catch up. Why are basic necessities that used to be manageable, marginal expenses in the 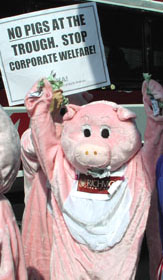 monthly family budget, like heating and health care, now luxuries affordable only by Rockefeller types? The more deregulation we’ve gotten, the higher things have gone—which completely puts the lie to all the BS right-wing promises. Old people and families will freeze this winter, but that’s OK; it’s the free market, after all, and that’s the highest good to which we can aspire. Right? Remember when those Enron energy managers were overheard on an infamous telephone tape laughing at making a killing by shutting off power plants so that California’s grandmothers would have to pay out the ass for electricity? It’s happening again, folks. And what kind of answers do we get from apologists for this kind of system? None, just the usual nonsolutions, defense of the energy status quo and tired diversionary epithets: “Communist!” “Socialist!” “Whaddya want companies to give the energy away for nuthin’?” So, just what kind of fucking country and world is this becoming? Who runs the law in this country, corporations or citizens? Congress can pass a price cap in two seconds if we all demand it. But that won’t happen because we know who really runs the country. The Boston Tea Party looms; the warm cushy mansions harboring the fat and satisfied few will be invaded; the revolution is coming folks, and I’m there. -EG

This entry was posted on Wednesday, August 6th, 2008 at 1:24 pm and is filed under 1, Congress, conservative, consumer, corporate crime, cost of living, Democrat, deregulation, economy, energy, gas prices, George W. Bush, Gravy Bread Postings, Life, lifestyle, Media, oil, prices, Republican. You can follow any responses to this entry through the RSS 2.0 feed. You can leave a response, or trackback from your own site.