War and Peace, I Will Read You Yet

There are literary mountains few dare to climb: Gibbon’s complete 7-volume Decline and Fall of the Roman Empire, each volume the length of a hefty novel, and Proust’s massive seven-volume Remembrance of Things Past.

A couple of weeks ago National Public Radio did a cute story in which people on the street were asked the question: Have you ever read War and Peace [and actually finished it]?

Not surprisingly, few had, but more intriguingly the few who had had interesting things to say about it. The gist was that the effort in doing so was amply rewarding.

I then did my own little survey and the first person I asked, my boss, answered that, yes, she has read War and Peace.

Well, that’s like throwing down the gauntlet. I, God help me, have resolved to wade into Tolstoy’s sweeping epic of the aristocracy, romance, war and double-cross; the great soaper of Napoleonic times.

To prep for this operation—like the armies in the book, it is a logistical, tactical enterprise to achieve strategic victory—I printed out the Wikipedia entry on War and Peace and studied carefully the names of the primary characters and their relations to one another, as well as reading the complete plot summary. Books with giant casts can be discouraging, causing one to flip back and forth trying to remember who is who, so I wanted to reduce the strain of this straight away.

So now, I already have a good grasp on the characters and can remember most of them and their relations before I’ve even read the first chapter. Task one complete.

Task two was deciding which English translation of the book to read. Believe it or not, this issue of the “right” or “best” translation appears to inspire fierce debate among the cognoscenti.

After a flurry of translations many decades ago, there didn’t seem to be any new ones until the past three years. Now, all of a sudden, three new translations have appeared.

A little research at the library was in order to help me make the decision on which edition to commit to.

There, I did side-by-side readability comparisons of selected passages between the older translations of Garnett, Edmonds, and Maude and the newest, highly acclaimed and hyped one by Pevear & Volokhonsky.

After comparing word choice and structure I decided to go with the Maude, though I did find things I liked about all the others. The key factor is: How well will the style stand up over a protracted period of reading? And for this the Maude’s clear and straightforward approach seems best. Garnett’s had style, but that can be fatiguing if one wants to roll forward and the P&V just seemed herky-jerky, way too busy. Unfortunately, the recent Briggs translation, which looks to be desirably dumbed down, is not available at any libraries in Louisville for comparison. Bromfield’s recent translation of the so-called “original” early version of the book was also at hand, and I really liked the clarity of it (and the 400 pages of trims), but since it’s not the canonical version of the book I had to rule it out.

Can I get this done this year? Would being done by summer’s end be an unreasonable goal? Will some other author, Hunter S. Thompson or Nathaneal West or Paul Bowles—with their far shorter and more rip-roaring tales seduce me away from the harder path? This we shall see.

Hey, I got through Victor Hugo’s Les Miserables, which is as long or longer than War and Peace, so I know I have the mental stamina. Hopefully it won’t be as much a bore as Hugo’s opus.
-EG 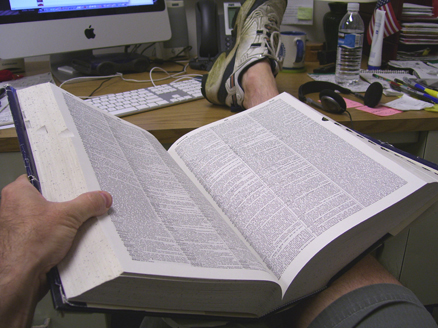 This is just me clowning around, this is a giant dictionary, not War and Peace...

This entry was posted on Friday, June 27th, 2008 at 12:17 pm and is filed under Books, Gravy Bread Postings, Kentucky, lifestyle, Louisville, War and Peace. You can follow any responses to this entry through the RSS 2.0 feed. You can leave a response, or trackback from your own site.

2 Responses to War and Peace, I Will Read You Yet