Reading Still… (and a slight homage to Runaway Train) 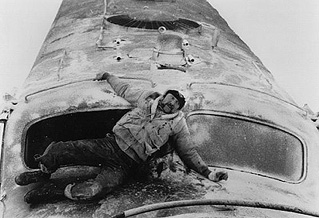 Hit a real stride in my reading lately. Polished off Reading Lolita in Tehran two weeks ago (highly recommended, a real eye-opener about life and art under Islamic fundamentalism) and simultaneously notched Whitley Strieber’s alien-abduction opus, Communion (“A True Story”). The latter turned out to be remarkably thoughtful, more a philosophical rumination on the nature of reality than a “scare” book, per se. Then onto Jon Krakauer’s Everest mountaineering true-life adventure, Into Thin Air: so exciting that I blazed through it in 2.5 days….which meant that I absolutely had to get my mitts on a copy of his previous book, Into the Wild, wherein the author traces the fascinating travels of an idealistic natureboy who went up to Alaska to live off the land and ended up dying instead. Shorter than the Everest book, …Wild was devoured in 2 days. Being on a roll with this enjoyable stuff meant that I had to put aside the Barack Obama book because, quite frankly, it’s pretty dry/bland stuff by comparison. The current read is Alien Agenda by Jim Marrs, a thorough overview of the history of UFO phenomena. I’ve just made it past the halfway point of this 600-page opus, which is much better written and organized than most UFO/paranormal books.

Just picked up big-scaled bios of celebrity figures from that golden age (1920s-1950s) when celebrity figures seemed more interesting (to me, anyway): one about the once-powerful multimedia gossip hound, Walter Winchell, and another about the witty (and gay) British playwright, Noel Coward. Also scarfed up a massive tome on the history of the KGB as well as a thousand page behemoth about the life of Spain’s dictator Francisco Franco. The latter two I practically stole; each $2 bargains from the Half Price Books clearance shelf.

Recommended listen at the moment is “Gilberto With Turrentine” (1971), which you can scarf up from Loronix.

Recommended double feature of the moment (with a locomotive theme) on DVD is Runaway Train (1985) (with Jon Voight and Eric Roberts, Oscar-nomed for possibly two of the worst leading performances in movie history, yet done with such brio/elan/gusto that one is tempted to call their histrionics “expressionistic”—so bad they’re great) and Emperor of the North (1973) starring Lee Marvin and Ernest Borgnine. The latter was originally titled Emperor of the North Pole, for no good reason, since it takes place in the lower 48—nowhere near the pole. Beware of its cheesy made-for-TV-style music score by Frank De Vol—which really hurts an otherwise good flick. Both films pit law-breaking anti-heroes against Captain Ahab-type-obsessed authority figures (a brutal warden in Runaway and a brutal train captain in Emperor).

Runaway Train overcomes some of its squirrelly “periodisms” (the shoddy farcical stuff in the railroad control room is the very essence of ’80s Golan-Globus cheese) and ends up being a masterpiece. The shots of the doomed train hurtling through the stark white landscape are mesmerizing. Favorite among the cast of eccentrics is Jordan (“Signal Maintainer 40 Here!”) who relishes with glee the prospect of a train disaster adding some excitement to his boring life of snowbound isolation. Rebecca DeMornay shed her Risky Business hottiness here for a somewhat shockingly plain tomboyishness akin to Pippi Longstocking after a bout of mud wrestling. There’s so much here to enjoy.

And you’ll hardly find any film with a better ending…

This entry was posted on Tuesday, March 4th, 2008 at 11:59 am and is filed under Books, Gravy Bread Postings, Movies. You can follow any responses to this entry through the RSS 2.0 feed. You can leave a response, or trackback from your own site.