This Here is a Louisville Blog; Let it Be Known 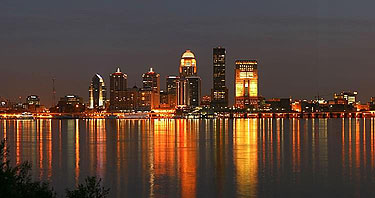 Having been almost fully dependent on my bike for more than a year now, I’ve more clearly noticed the surroundings and all the good things I used to ignore as I tooled around in an auto in this here hometown metropolis of mine, Louisville, Kentucky, USA.

At some point during the process yesterday of adding lots of new links to my “Louisville, Ky. Stuff” blogroll over there at page right, it occurred to me that this is a damn fine city. 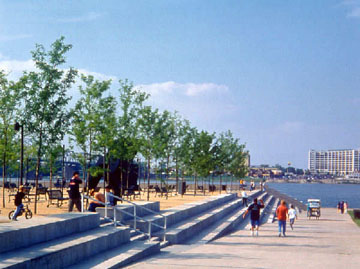 I didn’t always think so.

I’ve been to a few other places: Chicago, San Francisco, Atlanta and so on, and been impressed by what some of those cities have done. San Francisco is the most beautiful city I’ve ever seen; Chicago is the most exciting (I’m probably the only person I know who still has never been to New York City, but I’m sure that would be even more exciting).

By contrast, Louisville to me seemed a backwater, a surrogate target of my own scorn, maybe even a reflection of self-loathing and an inferiority complex.

Part of that notion might also be due to the influence of various well-meaning but misguided local businessmen and “leaders” who think we need things like professional sports teams and giant new stadiums so that we can be like Indianapolis or Atlanta. There’s a certain unseemly penis envy about this kind of manly inferiority between cities. Who the hell wants to be bigger, more congested and more polluted, anyway?

Louisville isn’t going to have a better quality of life or be better loved by locals or more admired by outsiders just because it has a pro basketball team. That’s dime-a-dozen shit, and pea-brained thinking to boot.

By getting out and about more, I’m discovering what makes Louisville unique and different. And none if it has to do with, nor will it ever have to do with, having some tax-sucking sports franchise that costs the average family $200 a game.

But, getting out of the car and getting around on my own power has opened my eyes. I breathe the open air and feel the atmosphere around me better perhaps. I’m more curious to explore, and more fascinated by what I see.

I’ve come to realize that we’ve got it pretty damned good in good ole Louisville.

Consequently, an almost embarrassingly maudlin sense of pride about my hometown has overtaken me of late. I might even be perfectly happy to spend the rest of my days here.

Why that is would take a lot of pages to explain, and would sound too much like I was a shill for the convention and visitor’s bureau. Anyway, this organization has named our River City/DerbyTown USA/Lou-a-vuhl one of America’s 30 Most Livable Communities. 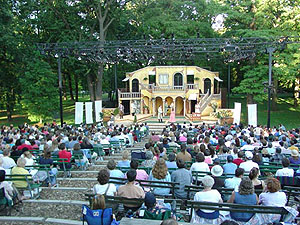 As far as culture and recreation go, we are really wanting for nothing in this town. We have nationally respected theatre (stuff has premiered here at Actors Theatre before becoming hits on Broadway), opera, ballet, a fine orchestra, dance groups, literary groups, chamber ensembles and a Bach Society, a bohemian strip along Bardstown Road where edgy indie bands play and great restaurants abound and every hot young thing wants to be seen, classy gentrified and beautifully restored and preserved 19th-century neighborhoods and downtown iron-cast storefronts, a good library and universities, a super art museum with a real Rembrandt, a recently developed recreational waterfront on the Ohio River, triple-A minor league baseball in a spiffy new riverfront park, and unique museums and other attractions all over the place, including a planetarium and an old steamboat. 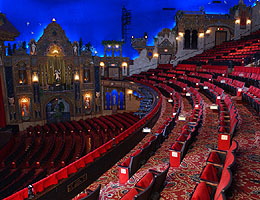 The Louisville Place has to be one of the most stunning venues for live and film entertainment in the country. 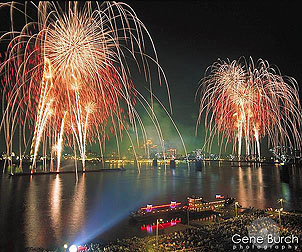 Not only do we have the Kentucky Derby, but we have a Derby kickoff event that has far surpassed it in scope and attendance, Thunder Over Louisville, the largest annual fireworks display on the continent.

And there are lots of funky nooks and crannies that make a city a real city, not just a collection of big suburbs surrounded by a tiny core of pathetic buildings that lack cultural cohesion and breadth (I’m thinking, of course, of Kentucky’s second-largest “city,” Lexington).

You’d be hard-pressed to find a hipper music store than Ear-X-Tacy anywhere else in the United States, or a better video store than the amazing Wild & Woolly Video, or a funkier bookstore than the rambling All Booked Up—all of them on Bardstown Road.

In Louisville we can go to a jazz nightclub, or turn on our radio 24 hours a day and hear Beethoven or Mahler or Duke Ellington or Tom Waits or Stereolab. That’s because we have three topnotch public radio stations. Very few cities this size can boast that.

And if we want to get our rocks off we can go to Louisville’s vast, evil network of adult businesses, and there are lots of them all over

town, from the Lion’s Den to Priscilla’s to Deja Vu to Frederick’s of Hollywood to message parlors and escort services and gay bars. You see, a lot of us ’round these parts figured out that sex is natural and necessary and a basic human need. In fact, Louisville just oozes and reeks with dirty, filthy sinful SEX. Ewwww, gross.
But if you want to go to church here, there are even far more of those around—for all denominations and faiths. And there’s country line dancing too at Coyote’s nightclub. 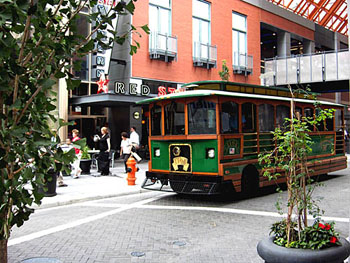 So, we are weird, in a good way. We are diverse and eclectic and eccentric and stark raving mad in a joie de vivre sort of manner. In other words we are not bland or banal or predictable or stuck in a go-nowhere dusty vacuous stark and repressed past or satisfied with everyone’s else’s low-bar expectations.

Exhibit A: Hunter S. Thompson came from here. And if you’re really hip, you know about Slint. 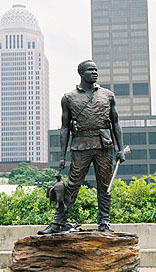 For these things, of course, the rest of the state of Kentucky hates us. And that just makes me fall in line in loyalty to my city all the more. Louisville pays the bulk of taxes for this Commonwealth and gets far less back in investment in return. And the gratitude we get for this is concealed jealously and scorn and stupid laws aimed against our progressive, cosmopolitan ways by the legislators who prefer to answer to the retrograde Rev. Billy Bob Chickenplucker types from Hogshit, Ky.

A similar vibe struck me a few years back when some fundamentalist-type southern Kentucky relatives of my wife—nice and polite folks, I’ll grant you—visited us at our suburban Louisville home and we took them out to Six Flags Kentucky Kingdom amusement part next to the fairgrounds. That’s all well and good, but that’s all they wanted to do. They didn’t want to go downtown and see other attractions with a true local flavor because they were “afraid” of crime. Never mind that Louisville’s crime rate is low—or that they’d be more likely to be struck by lightning on their rural spread than mugged on our city streets. Expanding their cultural horizons was really what they feared. 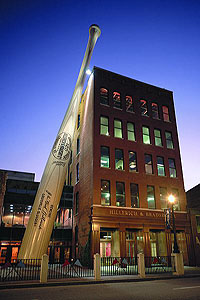 Through political fashions, including the 30-year trend toward electing conservative Republicans in practically every office in this state, the mayoralty of Louisville has remained staunchly and solidly Democratic, as has our aldermanic board. That’s because people here like solid, competent, dependable leadership, and prefer not to trade good basic governance for irrelevant, divisive ideology. God doesn’t make government work, thinking and working people do.

Although he has enemies as all politicos do, long-time Mayor Jerry Abramson (or as one local radio DJ calls him, “mayor for life”) is probably the most liked politician in the country.

.
Meanwhile, our Republican governor, Ernie Fletcher, can’t even get our downtown I-65 bridge painted properly without corruption and in a reasonable time…

So are we arrogant and elitist here in Louisville? Well, when you’re clearly superior, why the hell not be?

As in the past, I intend to post more stuff about Louisville in and among my other various ramblings. My intention is to keep the blog split about 50-50 between Louisville stuff and other various non-Louisville related topics. 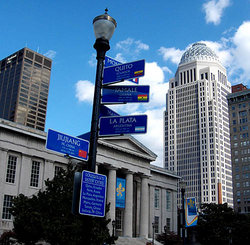 As I tool around on my bike with my digital camera, I’m snapping pix like a fool. What I hope to cover are people and things that the local media and others ignore or miss. Some of it will be ugly and some beautiful.

To me, even some of the ugliness is beautiful. Industrial ruins for instance; the despised and forgotten corners of Louisville’s past.

I hope to talk to poets and street people and people who ride the buses, and report what I find.

I recently interviewed Louisville’s number one atheist. I have some good snaps of this unique individual and his mission and hope to have an article on him soon.

I want to photograph the interiors of funky musty bookstores and other unique venues.

I might even complain about some of the bad things that plague us here: the unpredictable weather and heinous summer humidity, smog and pollen and the shitty Keystone Kops way our police do traffic control during special events and so on.

Whatever the case, I hope you can take the journey with me.

.
And in case I haven’t made it clear yet, Louisville is fuckin’ cool.

—photo credits/ All images were borrowed from publicly displayed and openly accessible websites/ if anyone has a problem with their images being displayed here, please tell me and we can either take it down or re-do the photo credit to suit your needs: 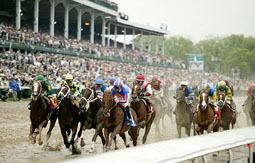 This entry was posted on Friday, June 15th, 2007 at 2:48 pm and is filed under bicycling, conservative, Democrat, Ernie Fletcher, Gravy Bread Postings, Kentucky, Ky., Life, lifestyle, Louisville, politics, Republican, tourism. You can follow any responses to this entry through the RSS 2.0 feed. You can leave a response, or trackback from your own site.

2 Responses to This Here is a Louisville Blog; Let it Be Known