Restored “All Quiet on the Western Front”

Only twice in the history of the Academy Awards did the truly best picture of the year actually win the top Oscar.

And in one of the those years, it’s still debatable. In 1950, there was no better film than best-picture winner All About Eve, but there were two movies that were just as great: Sunset Boulevard (best picture nominee) and Rashomon (best foreign film winner).

Early in its life, the Academy got it so very right. All Quiet on the Western Front not only was the best picture made in America that year, it was the greatest film made in the entire world.

For many years the film circulated in inferior transfers taken from worn and dirty and audibly inferior prints.

Last month, Universal finally, after a decade of sitting on it, released to DVD the long-awaited Library of Congress restored version of perhaps the greatest war movie ever made. 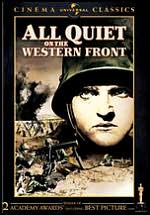 of this film comes up, which to my mind is not often enough, I have a hard time toning down my hyperbole. To me, it’s one of the 10 greatest and most important films ever made. (See, I did it again.)

There’s plenty of info out on the web and in books about the film. It’s a perennial undisputed classic, so I’m not going to replicate all of verbiage that’s been expended.

The stumbling block for most contemporary viewers is the stilted, overemphatic acting, a holdover from silent cinema. But with repeated viewings, I’ve come to realize that the acting style befits the hysteria that overcomes the green lads as they dodge death in the trenches.

Everything else in the film is perfect. It has a serious message and the good sense to show the horror of war without relying on obvious voiceovers and by minimizing noble speeches. When those speeches come, they do so at the right moments.

It eschews music. War is not a grand Wagnerian fantasy. There is no Ride of Valkyries soundtrack or a Samual Barber Adagio to sway viewer emotions. In this regard the movie surpasses all the so-called serious anti-war films of recent years. The only sounds are zipping bullets, and relentless shell bursts, machine-gun fire and screams.

The film remains timeless for being so raw, brutal and uncompromising. It feels like a firsthand documentary of WWI.

Made four years before full production code enforcement, All Quiet on the Western Front offered a non candy-coated, unromantic view of war that would not again be possible for Hollywood again until the 1970s. Stanley Kubrick made a good stab with Paths of Glory in 1957, but that was largely a theatrical, highly controlled and often artificial presentation.

The only jingoism in All Quiet… is mocked, right at the very beginning of the movie.

Director Lewis Milestone pulls his camera back from a window where jubilant crowds and a marching band hail their conquering heroes and send young boys to war. The window looks out from a school room and as the camera pulls back, an old schoolmaster orates some indistinct bellicose sounds drowned out by the trumpets and the shouts of the crowds. At first, it seems like technical limitation of early sound cameras, but as the camera dollies into the teacher his voice becomes distinct and the outdoor jubilation is recessed. The noises of the bands and the rhetoric of the schoolmaster are one and the same. No difference; all designed to whip the mob into a frenzy.

From there, the movie is one searingly memorable scene after another. Shorn of glitz, it the most honest movie ever to come from the golden age of Hollywood. It seems so much different from every other classic film. Like The Birth of a Nation, it remains a great movie event. A happening perhaps even more than it is art.

It is a film that must be seen more than once; its power builds with each viewing.

The conversion of friendly postmaster Himmelstoss into brutal sadist presciently shows why fascism is so appealing to the lower and middle classes; it provides a sense of power, surety and belonging missing in their lives. Himmelstoss’ relentless drilling of the raw volunteers provides for more amazing imagery as recruits are forced to fall into the mud over and over. His Napoleonic complex is tested when, at the front, he shows his true colors as a sniveling coward: OK with sending others to die but reluctant when it comes his turn.

After the film’s central battle—a long sequence of attack and retreat in which countless men on both sides are mowed down with no yardage gained—the men retreat to their trenches. One image that haunts me is Slim Summerville’s character, Tjaden, panting and sweating and hungry, taking out his dirty combat knife to slice some of the blood off his bread, then busting a bottle and passing it to his exhausted comrades, swigging without regard for the jagged bottleneck. 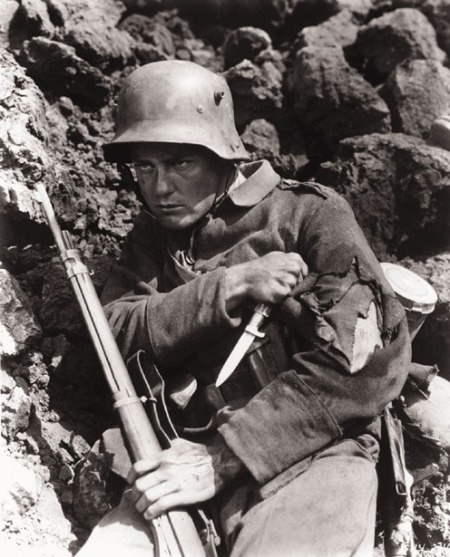 A scene that really jumped out at me on this viewing was after the death of Kat (Louis Wolheim), the hulking mentor to the film’s young protagonist, Paul Baumer (Lew Ayres).

At the medic station, Kat is left to lay as the medics go on about their card game. Paul simply walks away, stunned but powerless to linger or to cry. Just another day. The casualness of this scene in the tent; the way it is shot, with few cuts and the blase nature of everyone involved, make it seem incredibly real. There are many scenes like this in the film.

It was not a matter of if I would cry at some point in this masterwork, but when.

The final scene, which is famous but is nonetheless not a spoiler I want to reveal to the uninitiated, begins as the war ends. A solo wistful harmonica tune wafts across a landscape where cleanup appears to be underway. There are no sounds of barrage or gunfire. It feels more like the cleanup after a ball game than a still-dangerous war zone.

And then there is the famous ending, and here I found myself again choking back tears as Paul Baumer reaches out his hand to meet his destiny.

Despite their harrowing depictions and serious intent most serious war films of recent vintage, including Saving Private Ryan, find a way to give audiences closure; to give them an emotional out; to get them off the hook.

All Quiet… does not do this. It only gives us the accusing faces of the dead.

As for the restoration, there’s nothing to offer but praise for both the improved image and sound, particularly the sound. It adds another dimension to a film that was already powerful and overwhelming.

I bought the DVD at Costco for the no-brainer purchase price of $8.69.

Beware, do not buy the earlier, inferior DVD issue with the blueish background. The stark DVD cover art shown in the picture above is the new and better issue. It says “Library of Congress” restoration in the back cover text.

The image below from the film is a timeless one. The soldiers at Walter Reed and the ones with their limbs blown off and (warning, disturbing) faces burned beyond recognition accuse us still. 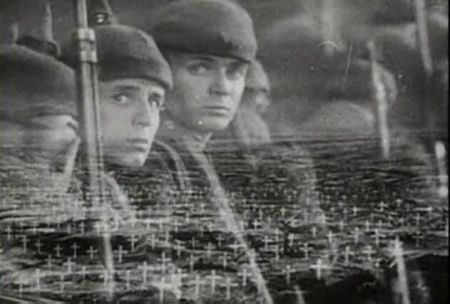 This entry was posted on Monday, March 5th, 2007 at 2:39 pm and is filed under Film, Gravy Bread Postings, Movies, pop culture, Reviews, Video / DVD. You can follow any responses to this entry through the RSS 2.0 feed. You can leave a response, or trackback from your own site.

One Response to Restored “All Quiet on the Western Front”